However, the existing data was far from being homogeneous: different countries follow different standards, there was no framework for data reporting or archival and data documentation incomplete. As a result, and despite the utmost relevance of permafrost in the Earth climate system, the data has not been used by as many researchers as intended by the initiators of these global programs. While the monitoring of many other Essential Climate Variables has been tackled by organized international networks (e.g. FLUXNET), there was no central database for all permafrost-related parameters.

ervatories for detecting, monitoring, and predicting climate change and it was outfitted with an "open data policy" (i.e. all data is freely available via the World Wide Web).The monitoring of permafrost temperatures, active-layer thicknesses and other parameters has been performed for several decades already, but it was brought together within the GTN-P in the 1990’s only.

The GTN-P database is the one-stop shop for permafrost monitoring parameters where the researcher can find data, metadata and information of all relevant parameters for a specific site. The network’s two international monitoring components are: 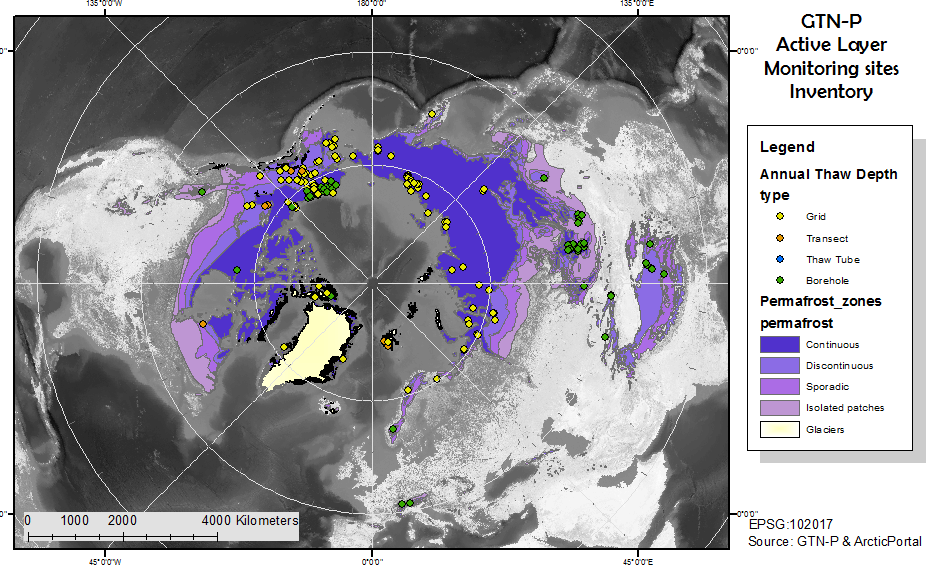 The data is accompanied by information about elevation, vegetation, landform and occasional soil moisture data.

The primary goal of the CALM program is to observe the response of the active layer and near-surface permafrost to climate change over long (multi-decadal) time scales. The CALM observational network, established in the 1990s and hosted at the George Washington University (Washington D.C., USA), observes the long-term response of the active layer and near-surface permafrost to changes and variations in climate at more than 200 sites in both Hemispheres. The majority of sites measure active-layer thickness on grids ranging from 1 ha to 1 km², and observe soil temperatures. For each site, metadata forms exists with information on location, elevation, slope and aspect, responsible investigator, geomorphology, landscape, vegetation, soils, additional measurements at the site (e.g. temperature, soil moisture, snow cover), and closest climate station (with some values, e.g. mean annual air temperature).Most sites in the CALM network are located in Arctic and Subarctic lowlands. The broader impacts of this project are derived from the hypothesis that widespread, systematic changes in the thickness of the active layer could have profound effects on the flux of greenhouse gases, on the human infrastructure in cold regions, and on landscape processes. It is therefore critical that observational and analytical procedures continue over decadal periods to assess trends and detect cumulative, long-term changes. Since 2009 CALM is part of the NSF Arctic Observing Network (AON) Program (Project ARC-1002119). In the Arctic and Subarctic lowland of the Northern Hemisphere, active-layer thickness was measured at >190 sites in 10 countries in different permafrost zones for at least the last 12 years. In addition to lowland CALM sites active-layer thicknesses are monitored in 20 boreholes in mountainous regions of the Northern Hemisphere (>1300 m elevation). For most CALM sites, standardized metadata is available. 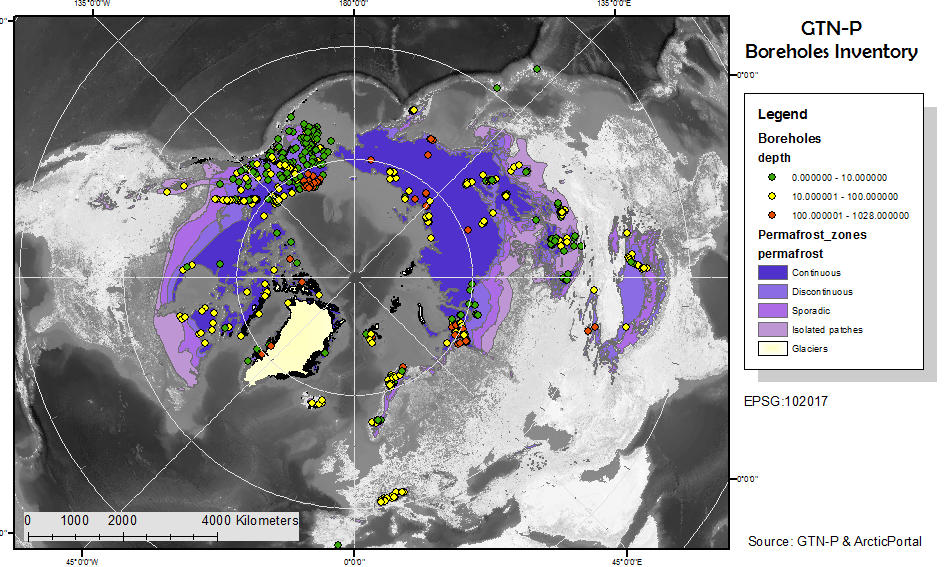 The main objective of the Thermal State of Permafrost program is to „obtain a deeper under-standing of the temporal (inter-annual and decadal time scales) and spatial (north to south and west to east) variability and trends in the permafrost temperatures to develop more reliable predictive capabilities for the projection of these changes into the 21st century”. The TSP data set serves as a baseline for the assessment of the rate of change of permafrost temperatures and permafrost distribution, to validate climate model scenarios, and to support process research in order to improve our understanding of permafrost dynamics. The existing permafrost database, previously maintained by the Geological Survey of Canada, has been largely enhanced during the IPY years 2007-2009. This included the establishment of new boreholes (more than half of the Northern Hemisphere boreholes were drilled during the IPY), the integration of existing permafrost observatory sites, and the collection of historical data. The results of this inventory of boreholes were presented in the so-called “TSP Snapshot” (IPA 2010). The TSP Snapshot (IPA 2010) is to date the most complete inventory of TSP boreholes and summary temperature data (MAGT from 2008 and older) worldwide. The boreholes were grouped according to their depths. For some countries, permafrost temperatures with higher temporal resolution are available within national networks and databases. The main source for Alaskan and Russian TSP boreholes is the “Permafrost Lab” of the Geophysical Institute of the UAF, headed by Vladimir Romanovsky. Together with their partners they run and maintain > 200 boreholes, with depths ranging between 1 and 380 m, mainly in Alaska and Russia. The data is available (in daily averages for SU, SH, IB; DB: 1 annual value) via the website of the UAF Permafrost lab or via the CADIS Server of the National Snow and Ice Datacenter (NSIDC). Norwegian and Svalbard data in raw format (hourly values) are at the NORPERM database. Within the polar region of the Northern Hemisphere, ground temperatures are now measured in ~790 boreholes.The main focus for the establishment of new sites was to close geographical gaps in the monitoring network. Air, surface and ground temperature was measured in boreholes ranging from a few meters to depths greater than 125 m. 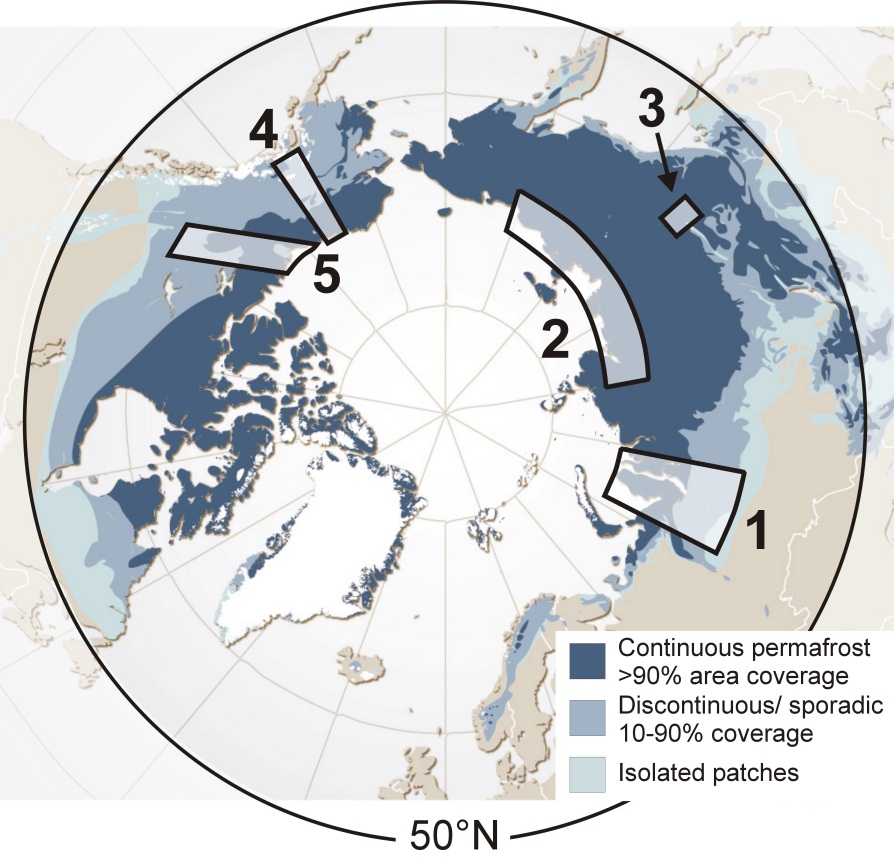 The ESA Data User Element (DUE) Permafrost project provides a mid-to-long-term Earth observation service for permafrost remote-sensing derived applications for northern high-latitudinal permafrost areas (north of 55° N). From the beginning, scientific stakeholders and the IPA were actively involved in the project. The DUE Permafrost remote-sensing derived products are key parameters for permafrost research: land surface temperature (LST), surface soil moisture (SSM), frozen/thawed surface status (freeze/thaw), elevation, land cover, and surface waters. The DUE Permafrost consortium consists of five project partners. Each of them is responsible for the development and the evaluation of one or more DUE Permafrost products.

The DUE Permafrost products are provided for the entire permafrost area north of 50° N. Time series of circum-Arctic land surface temperature, frozen/ thawed surface status, and surface soil moisture are provided with weekly and monthly averages from 2007-2010 with 25-km pixel resolution. The global land cover has a spatial resolution of 350 m. The new circum-Arctic DEM dataset north of 50° N has a 100-m pixel resolution. In addition, in order to set up the required validation tasks and information services, a target area approach with five case study regions with higher spatial resolution (pixels ranging from 150 m to 1 km) than the circum-Arctic products were developed. The tests regions are

FLUXNET is a "network of regional networks" that coordinates regional and global analyses of observations from micrometeorological tower sites. The flux tower sites use eddy covariance methods to measure the exchanges of carbon dioxide (CO2), water vapor, and energy between terrestrial ecosystems and the atmosphere. At present over 500 tower sites are operated on a long-term and continuous basis. They are located in different vegetation zones, including temperate conifer and broadleaved (deciduous and evergreen) forests, tropical and boreal forests, crops, grasslands, chaparral, wetlands and tundra. Sites can be associated with regional or domain networks or can be unaffiliated. Flux towers operate on five continents and their latitudinal distribution ranges from 70° N to 30° S. The FLUXNET database contains information about tower location and site characteristics as well as data availability. Eddy covariance data at 30-minute frequency are typically maintained, not by FLUXNET, but by individual towers or by networks to enable standardized data processing, gap-filling, and formats. FLUXNET, which is a component of NASA's ORNL DAAC (Distributed Active Archive Center), has several primary functions: it

(2) maintains information about the availability of flux data along with links to the flux data at individual towers or at networks;

(4) compiles, archives, and distributes carbon, water and energy flux measurements for unaffiliated sites and others, as requested;

In a related effort, the ORNL DAAC provides subsets of remote sensing products (MODIS Land Products) for an area of 7x7 km around each flux tower in the FLUXNET collection. This information can be used as background site characteristic data, to examine ecosystem dynamics, to scale up the findings at tower sites, or to parameterize ecosystem models.

The aim of FLUXNET is to have a coordinated, global, long-term flux net to be able to address hypothesis that could not be addressed with data from a single or even a few flux tower sites. These are

INTERACT is a EU FP7-funded circum-Arctic network of 33 terrestrial field bases in Scandinavia, Russia, the USA, Canada, Greenland, Iceland, the Faroe Islands, and Scotland together with, currently, a further twelve observer stations in Svalbard, Russia, Switzerland, Austria, Poland, the Czech Republic, and Canada. Its main objective is to build capacity for identifying, understanding, predicting and responding to diverse environmental changes throughout the wide environmental and land-use envelopes of the Arctic. Together, the INTERACT stations host many thousands of scientists from around the world working in multiple disciplines, and INTERACT collaborates with many research consortia and international research and monitoring networks. One particular achievement of INTERACT was to bring together for the first time descriptions of the major terrestrial research stations of the north and their activities in the INTERACT Station Catalogue (INTERACT 2012) that will be used as a central resource by PAGE21 because of the strong overlap of PAGE21 primary and secondary sites and INTERACT Stations.